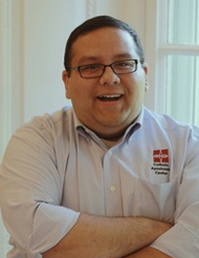 With the Center since 2011, Chris Pierno is the Catholic Apostolate Center's Senior Consultant. In this role, he directly assists with Center's advancement program and coordination of consulting services. He also supports the staff in areas of  graphic design, marketing, public relations, administration, and strategic planning for the Center. Chris also is a co-host for the Center's podcast On Mission.

He holds a master's degree in management, and a bachelor's degree in politics, with a minor in theology from The Catholic University of America. Chris also serves as President-Elect of the University's Alumni Association. In addition to his work for the Center, Chris works for a direct marketing agency in the Washington, D.C. area specializing in Catholic fundraising. He also holds several positions in the Knights of Columbus including State Secretary for the District of Columbia, Former District Deputy, and Past Grand Knight.