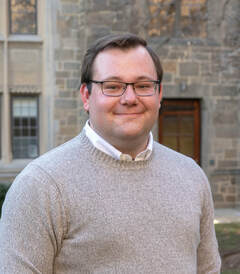 Alex Cranstoun - Media Associate
Email: alex.cranstoun@catholicapostolatecenter.org
Phone: (301) 448-1880
​
Alex Cranstoun is the Media Associate, where he assists in the development, implementation, and maintenance of the Center's promotion efforts, including the Center's podcasts, webinars, videos, and publications, in addition to other varied production efforts. Alex also assists with the Society of the Catholic Apostolate's promotion efforts.

​A native West Coast Washingtonian, and before finding his way to D.C. to study Theology at The Catholic University of America, Alex was highly involved with his Parish, serving as a retreat leader for the high school program and serving as a youth minister in his later years. While he really enjoys the DMV metro area, Seattle will always be his home. Alex started working with the Center as an Intern and soon fell in love with the Center's mission and has desiring to come back ever since. While at Catholic U, Alex was highly involved with both Campus Ministry and the Knights of Columbus.